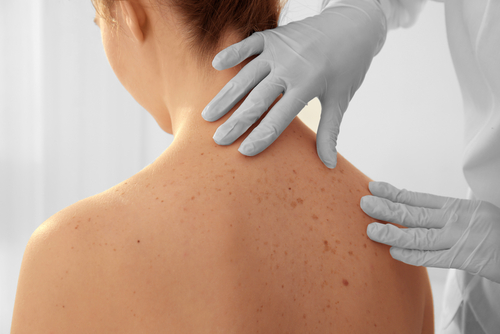 According to the National Cancer Institute, over one million people in the United States are diagnosed with skin cancer every year. One in five Americans will develop skin cancer in the course of a lifetime.

Malignant melanoma accounts for only three percent of skin cancer cases, but it causes more than 75% of skin cancer deaths. Melanoma is characterized by the uncontrolled growth of pigment-producing cells which cause an existing mole to darken and enlarge. Basal cell carcinoma and squamous cell carcinoma, non-melanoma cancers that begin in the cell layers beneath the outer skin, account for about 90% of non-melanoma skin cancers.

The incidence of all skin cancers is on the rise largely because people do not sufficiently protect themselves from excessive exposure to the sun’s ultraviolet rays, the most significant and preventable risk factor in developing skin cancer.

Squamous cell carcinoma of the skin is a common form of skin cancer that develops in the thin, flat squamous cells that make up the outer layer of the skin.

Melanoma, the most serious type of skin cancer, develops in the cells (melanocytes) that produce melanin — the pigment that gives your skin its color. If not caught early, melanoma can spread internally. According to the American Cancer Society, nearly 10,000 Americans die annually from melanoma. Signs of melanoma include moles with uneven pigmentation or irregular borders. The risk for melanoma is increased by sun exposure and use of tanning beds.